We will be holding a work session this week on Saturday January 23, 2021.   The session will be from 9am-noon.   If you would like to see the progress stop by and say hello (please wear a mask.)

This week we lost a member of our Strand Family.   David Finkel writes the following:

Gordon Hood came to the Strand just after we started working on the theater.  He was a friend of my co-founder Steve Frazee.    Gordon had an infectious personality and a work ethic that was beyond compare.  I soon learned that the Strand would bring me personal joy in ways I hadn’t considered.  Gordon was one of them: a great friend, mentor to my daughter, and a person I could learn from.

Gordon’s background wasn’t like most of us.   He was a career military man.   He was a helicopter mechanic and was proud of his Hueys.    Funny thing was the more I got to know Gordon, the more places I learned he had been.   For a helicopter mechanic he sure got around.   He was proud of his service yet did not dwell on it.  When I could get him to tell a few stories, they were told with enthusiasm, always with the mission in mind.

We started our renovations March 3, 2007.   Steve and I had a clear vision and a stout work plan of what needed done.   Once the auditorium was prepared (that took until August) it was time for paint.   We just acquired a paint sprayer, with 40 gallons of primer on hand.   Unknown to us Gordon got the thing fired up and started to turn the Cabaret ceiling white….Holy Cow!   It got us motivated.   What was a dark dank space, a theater was starting to emerge.   You could see all the details!   Gordon decided he was going to paint the whole thing.   Remember, our ceiling is 40 feet above the auditorium.   Out came the scaffold and Gordon went to town.

That first night the crew took a picture.   We were hot (remember it was August) and sweaty.   A year later the same group was working a show.   We staged another identical picture.   We will post those next week.  Gordon was beaming from ear to ear.

Gordon was a “can-do” guy.   His infectious attitude rubbed off on everyone else.   When it was time to open the theater Gordon decided he wanted to learn to run sound.   Being a smart guy he was an excellent student.   Ron Bush mentored him and taught him the intricacies of doing a good job.   Gordon learned, and learned well.   Within a year he was doing shows by himself.   He did the set-up, sound checks, and performances.      Gordon made SURE the performer sounded great to the audience.   He always got rave reviews.   Whether local, regional, national, or international performers, they all loved Gordon and trusted his skill for their music.

Gordon was a founding board member of the Strand.   When we put the board together it was important to have people serve who were not accustomed to not-for-profit board membership.   Gordon served until his death.   Along with us, he also served two years with the Bears of Blue River Festival board.  Not bad for a guy who showed up to help.  Gordon went through a lot in his life, but his legacy will be in the work he has done for his country and our community.

Gordon is the second board member we have lost, with Lou Martin being the first.   When we reopen it will just not be the same.   Gordon was always there with a smile and a greeting.    That cannot be replaced.   May his memory be a blessing – David M. Finkel 1/19/2021

Thank you for the support.  See you at the Strand! 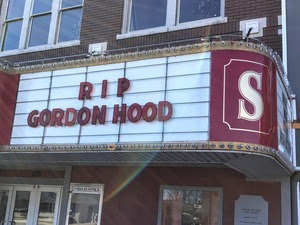